skip to main | skip to sidebar

I started this post at this blog and my other blog, about my father at least four times. This will be attempt number five.

My parents were divorced when I was five years old... Between my father's philandering, unholy temper, propensity for using his hands to express anger, and my mother's unwise use of chemicals, theirs was a match made in the depths of hell. As difficult as it was, their divorce, in 1969, was a blessing for the whole family.

After the divorce, my mother took us three children from California, where my dad was stationed (he was in the Air Force), to New Jersey where my maternal grandmother lived.

We were raised by my mom and (mostly by my) grand mom, and saw my dad whenever he was stationed somewhere nearby... in the early 70's, it was in central Massachusetts.

On school holidays, my father would drive from Westover Air Force Base to our house in NJ, come inside long enough to say hello to my mother and to use the bathroom, and we'd be on the road! It was during these trips that my father first demonstrated his perfectly abysmal ability to tell jokes. My father told the absolutely worst jokes on the planet. He would tell a joke, and then roar with laughter... not caring if anyone else found them funny. My dad also told awful knock-knock jokes, like this one:

My dad and I formed a decent relationship, and after he retired from military service, in 1973, he went back to his hometown of Baltimore, Maryland. We (my older brother and sister, and I) visited fairly regularly, and after the older two graduated from high school and went out into the world, I continued to visit on my own... by this time, I had graduated to taking the train, which I thought was pretty cool.

I continued my visits with my dad (and his wife and their daughter, my half sister), until I graduated from high school and joined the service.

One of the best things that my dad ever did for me, is something he probably doesn't even think of now.

When I left home to join the service, my recruiter picked me up early in the morning, and took me to the processing point, in Newark (NJ, not Del.), where I had to fill out forms, get shots, etc... We were then put aboard a bus to the airport for flights to our basic training destination... in my case, Parris Island, South Carolina.

As we were about to board the plane, I heard a shout across the terminal: "Billyyyyyyyyyyyy!" It was my dad, sprinting in my direction. He didn't even tell me he was coming! This was in 1981, and my dad was about three years older than I am now. He drove his little Toyota Tercel to the point where his engine completely gave up the ghost in the parking lot of the airport... just to get there to see me off. He gave me a hug and said: "I'm proud of you, son!... time to be a man, now. Take care of yourself, and call when you can"

He had driven nearly three hundred miles with a car whose engine was literally coming apart at the end of the trip, to spend about thirty seconds with me. It was then that I realized that many of the things that my mother had said about my dad for years, weren't all true. Somebody that doesn't give a shit about their children doesn't do something like that.

Life went on, and my dad was a proud observer of my time in the service. Proud of my accomplishments, and of my promotions. He was even more proud when I came back from overseas the first time, speaking German even better than he does (an odd talent... my brother, father and I are nearly fluent in German... it drives our other relatives nuts!).

I didn't even know those things were bothering me, but they all came out in a rush of words.

I immediately felt like I had taken a load of bricks from my shoulders, and it felt good.

My brother and sister were pissed about what I said to my father, but that is a story for another time.

Anyway, it was time for Soccergirl's baptism, and he and I had a long talk in which he apologized to me for all of the things that I mentioned, and some that I hadn't mentioned.

From that day, six years ago, to this day, my dad and I have enjoyed a fantastic relationship.

I think I mentioned, over at my other blog that my father was largely responsible for my remaining in touch with my oldest child after my divorce. I called him the other day to thank him.

If you have any bad feelings with anyone, friends, remember that it is NEVER too late to try to reconcile with someone if both parties are still living. 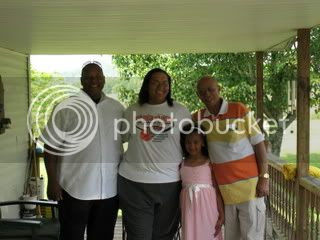 What a great story. And once again, you managed to make me all teary-eyed. I think we all have issues and hurts from our dads at some point in our lives; I'm no exception. But when it comes down to it, I know deep down my dad is a good man who loves me and I love him, too. You did a great job of conveying exactly that sentiment with this piece. Thank you!

It's a wonderful thing that you and your dad were able to rebuild the love between the two of you after so many years especially given the circumstances.

Each of you is lucky to have the other.

Gunfighter
I'm a husband, a father, a Sunday School teacher, a servant of God's church, a lawman, an aspiring novelist, a blogger with really cool friends, a helper of those in need, and an unapologetic, tattooed political centrist.